The year 2014 was the year of aviation disasters, when many people have died because of the mistakes of pilots, wars, unsuitable aircraft conditions, bad weather conditions or another, by now, unknown reasons. Sadly, Malaysia Airlines was the one, who suffered the most last year, when lost two wide body aircraft in horrible accidents. However, I flew with them a few weeks ago and how was it find out in the  post below. Is this airline still affected with sad accidents from the past and what is it like to fly with Malaysia Airlines after MH370 disaster?

WHAT HAPPENED TO MALAYSIA AIRLINES IN 2014?

There were two disasters during the 2014 year. The first one, that still remains unresolved, even after the one year is MH370, when the air plane suddenly has disappeared from radars on the route from Kuala Lumpur to Beijing and has never been found. The second one, MH17 on the route from Amsterdam to Kuala Lumpur was shot down in July, while cruising over the war zone in south-eastern Ukraine. Both flights were operated with Boeing 777, wide body aircraft, mostly used for flights longer than 5 hours.

Malaysia Airlines is going through the huge economic crisis, since the loss of two large aircrafts isn’t cheap thing and it certainly would be the biggest burden for any other airline. People just don’t want to fly with Malaysia Airlines these days, since they’re afraid of their lives and my friend, who works in the travel industry, where he sells flights has told me, that people are willing to pay more to avoid flying with Malaysia Airlines. Even though, it was exactly one year after the first disaster, the on-line bullying of this airline continues and there are thousands of people blaming Malaysia or make stupid jokes. No one of us knows what exactly happened to MH370, although the most reasonable version of many stories, that people tell is, that it was the pilot’s suicide. Hopefully, the world will figure out one day.

I flew with Malaysia Airlines twice this February, on the route from Phuket island in Thailand to Kuala Lumpur and then from Kuala Lumpur to Bali in Indonesia. These two flights were operated with Boeing 737-800 series and the first one took around an hour and half and the second one around three hours. Both aircraft were brand new, with small TVs in the seat in front, which is quite unusual for this type of aircraft. The Boeing 737 is mostly used for shorter flights, so TV monitors aren’t necessary, although, Malaysia Airlines have them even in these planes.

food on board Malaysia Airlines

flying over Thailand with Malaysia Airlines

Flying with Malaysia Airlines wasn’t different than  any other company in any way, why would it be, tho? Even though, I didn’t like the food – we could decide whether to eat fish or cheese sandwich (which wasn’t very tasty) with jelly yoghurt and juice. The menu was exactly the same on both flights, so I had my fish sandwich twice. Besides of the food, I actually loved flying with Malaysia Airlines – the stuff was very professional and smiling, even though, all of us on board, in the back of our minds, were thinking of previous disasters that happened to Malaysia Airlines. 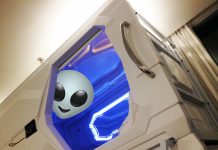 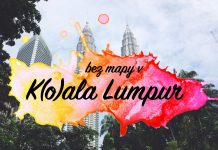 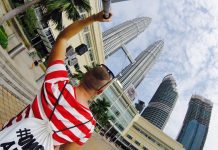