San Francisco belongs among cities, where you spend more money than in the others. Hotels are expensive, flights are expensive and restaurants or pubs are expensive, as well. But it doesn’t mean, you have to pay hundred of dollars for just being here, there are so many thing you can do for free here, and I will give you few tips, how to save money, too. Read more about free things to do in San Francisco.

HOW TO FLY TO SAN FRANCISCO CHEAPER? 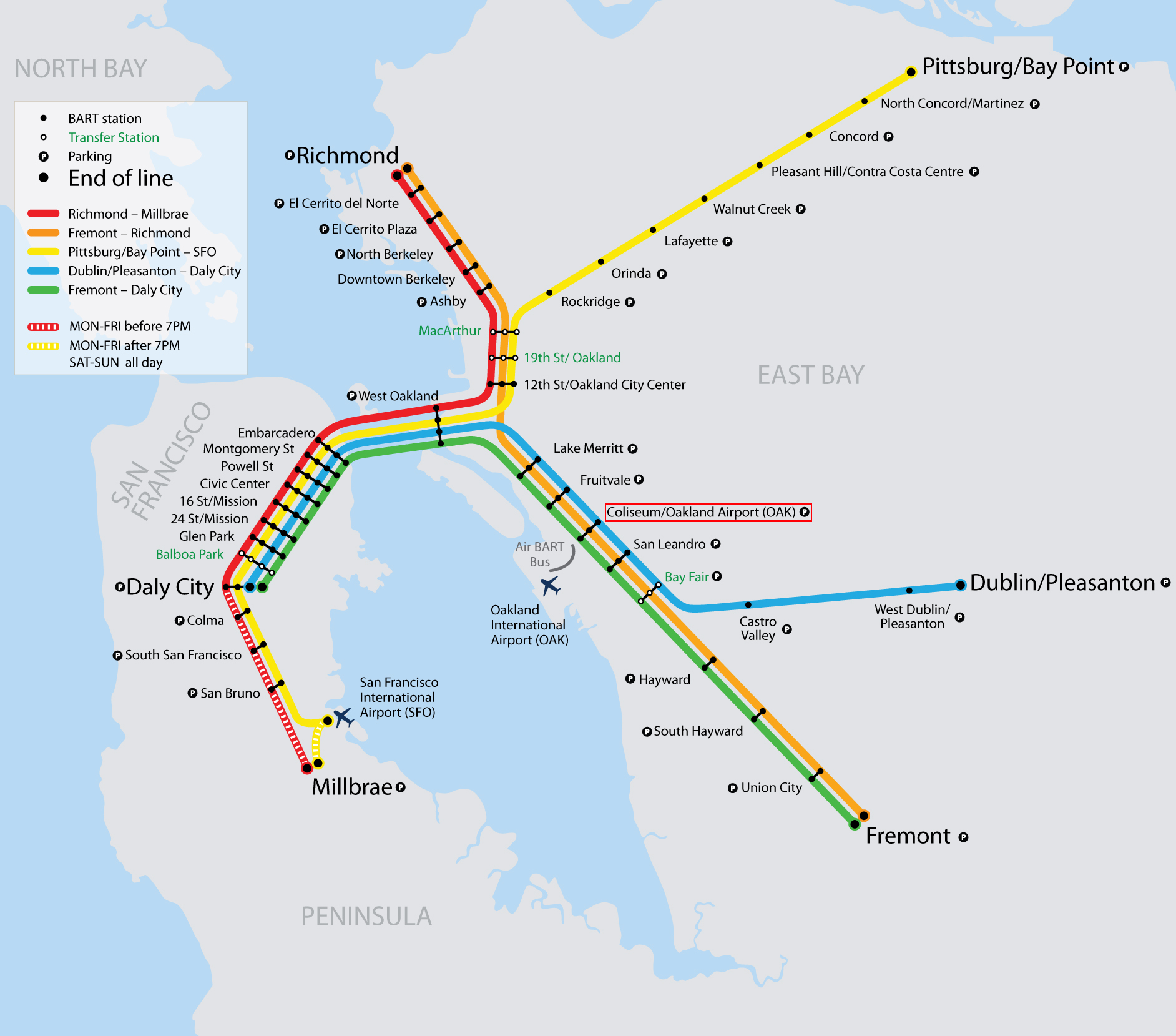 These trains belong under BART Rail System and this system connects both cities, but you have to know that this is not metro. Metro have different lines, stops and fares. Each BART station is clearly and visibly marked with logo of BART company, so you will easily spot it.

This is the crookedest street in the world on Russian hill. But how it come to be this crooked? The answer is simple. The descend is very steep, actually it is 27% so it would be dangerous for cars and pedestrians, if cars would have driven through in high speeds. The architects decided to design Lombard street with 8 curves in 400 meters, which will make drivers to drive more carefully and to slow down the speed. Many inexperienced drivers have problems to drive through this one-way street, where the maximum speed is 8 km/h (5 mp/h). 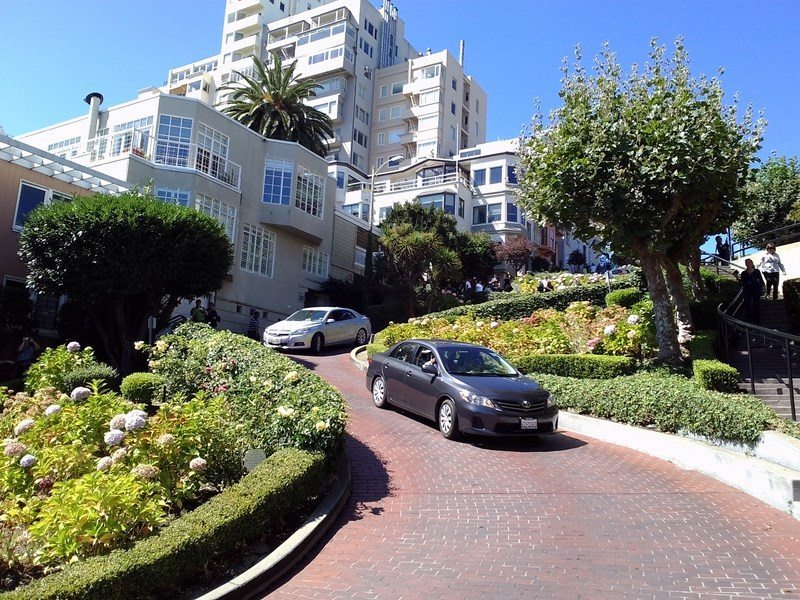 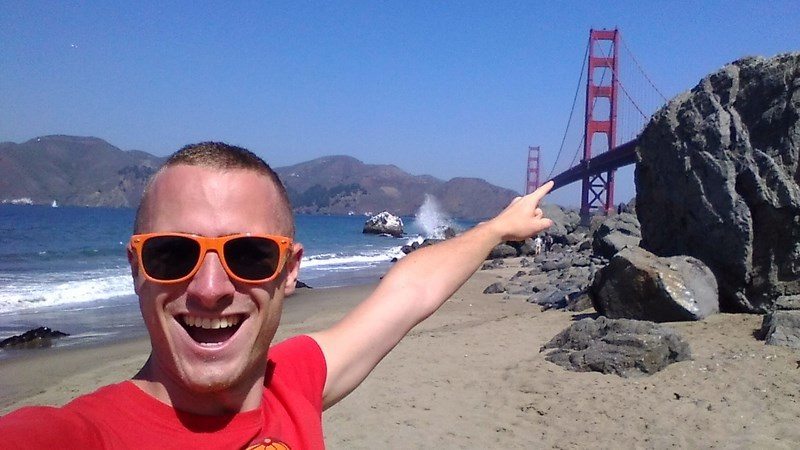 If you don’t have car, the visit of Golden Gate bridge will cost you no money, unfortunately,  the drive through isn’t free. You can simply walk from one side to another, which takes around one hour. I suggest you to bring some warm clothes, since the winds goes crazy over there. The bridge has to be repainted each year, to prevent corroding the metals, which is built from and it is estimated  almost 40 000 liters of paint (10 000 gallons) to be used, to repaint the bridge. The color of the bridge is connected with the weather, the bridge is orange because of the fog – it is easily visible for incoming ships.

The weather of San Francisco will not let you to enjoy the waters of pacific ocean, but even this fact, San Francisco has few beaches. The most popular and crowded is Baker beach, which is located in the Western part of the city, right next to the Pacific ocean. The waves are crazy, strong and high and the water is freaking cold, but you can spend some nice time here with your friend and Frisbee. If you are not afraid of nudist, you can walk straight right under the Golden Gate Bridge. More about beaches of San Francisco in my article Top Beaches of San Francisco. 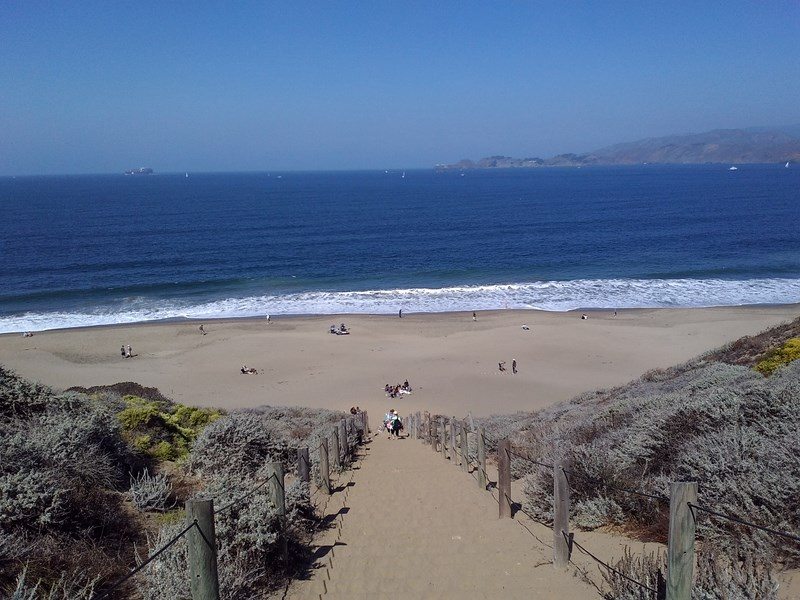 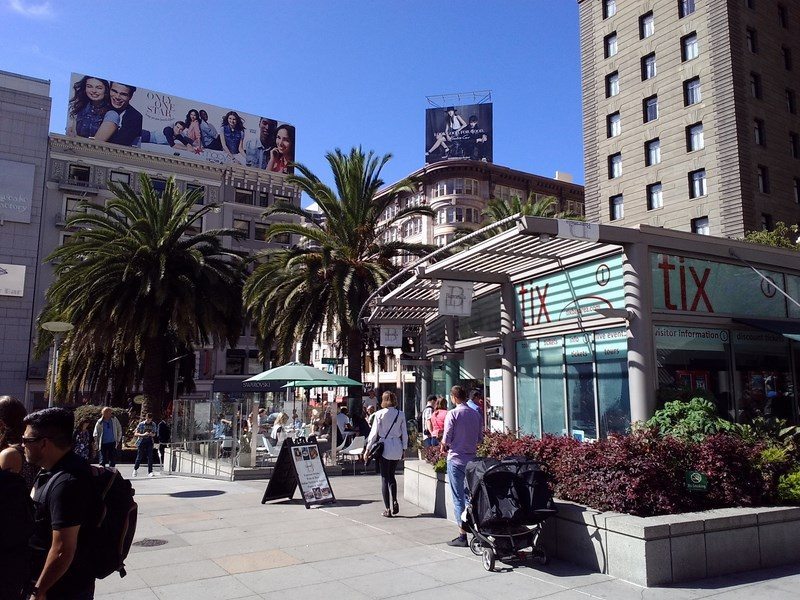 The center of San Francisco is on Union Square. This place was originally sand dune and later it became a public park. In the middle of this square is high monument as a tribute to sailors of United States navy. From here, you can basically walk all around the old town, to almost every attraction listed here. This square has probably the most expensive restaurants, so if you don’t want to spend too much money, you can just sit in the middle of San Francisco and enjoy the views of skyscrapers hidden behind palm trees. The Union Square is the place, where you can spot famous Cable Car passing by, as well. 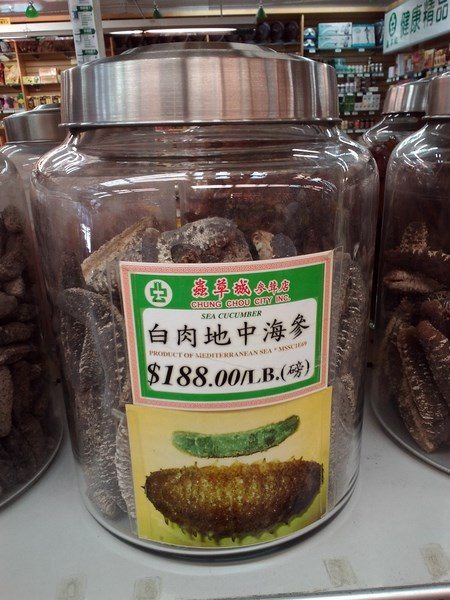 Did you know, that in San Francisco, there is the biggest community of Chinese people in the world? This is actually the largest China Town outside of Asia and oldest China Town in North America. The entrance to China Town is through big gate, very close to Union Square. Here at this amazing place, you are not in America, anymore. As you pass the gate, you’re in China. You will meet many Chinese people shopping in local markets and tourists buying souvenirs. If you are hungry and you have enough of american food, stop by in local restaurants and get your order. When we wanted to pay, we got the bill in Chinese, so we barely could figure out what does it say, haha. You can spend here as much time as you want to, these people are very kind and proud of their rich and world’s spread culture. 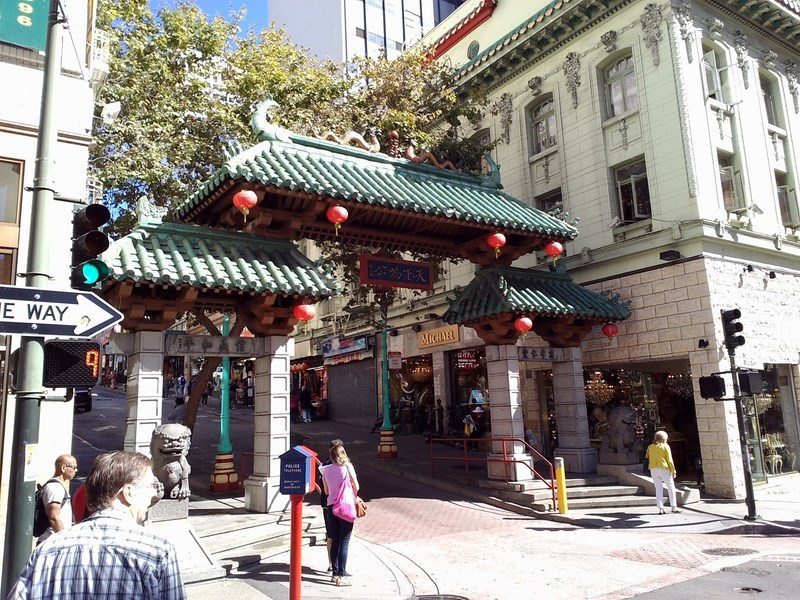 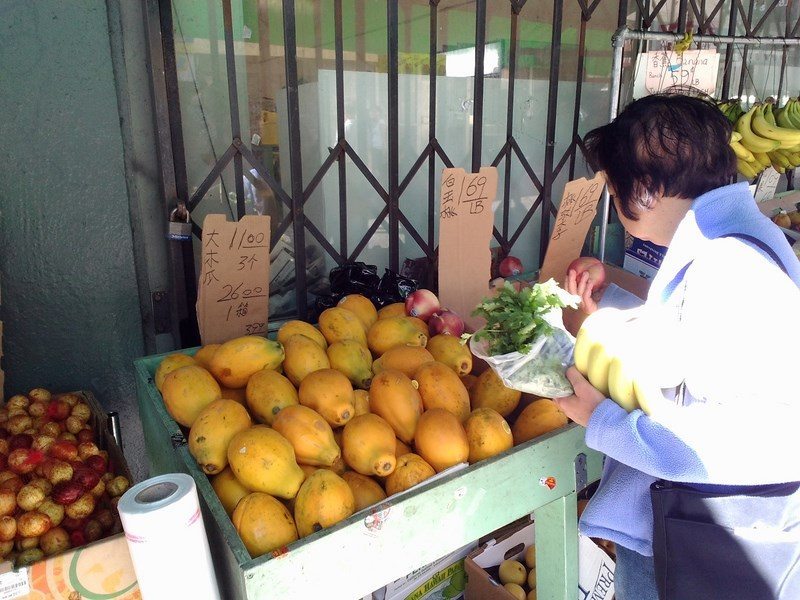 Here you can see the video I recorded in China Town. I like the way, how women talk to each other, loud and in Chinese of course :) 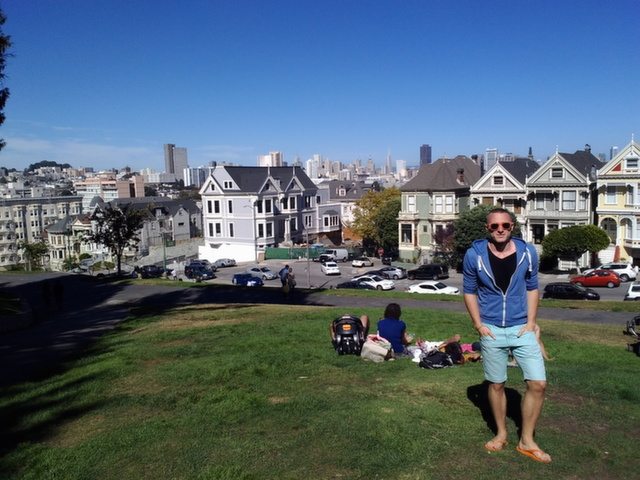 Painted Ladies is term used for houses painted in more than three colors to enhance architectural details. San Francisco is known for these houses and they appear probably on every single post card, where isn’t the picture of Golden Gate Bridge. Houses, Painted Ladies are built all around the town, but the most known row, called „postcard row“ is right next to the Alamo Square park, on Steiner street. This square is located very close to city center and you can walk here from Union Square in less than 30 minutes. More about Painted Ladies read in my single article – Who Are Painted Ladies in San Francisco?

San Francisco has largest gay community in United States. One whole district is known as „gay“ district, where usually gay people live, meet and socialize. This district is full of discos, fancy and expensive restaurants, nice cafeterias and shops. Why the gay district is right in San Francisco? It is connected with Hippie era in 60’s. Many gay soldier has moved to San Francisco because of hippie era, that presented sexual freedom and immediate pleasure. Castro is located very close from Civic center, so you can walk here. It takes around 15 minutes. 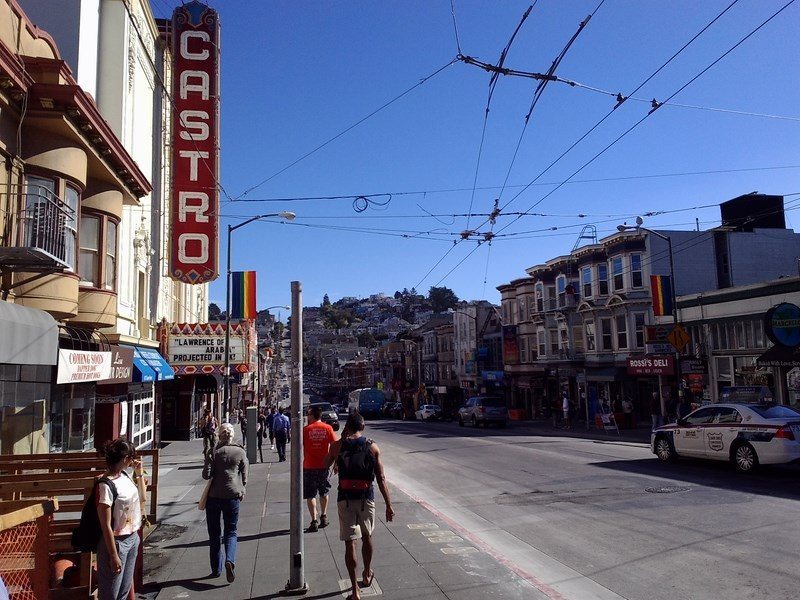 Golden Gate park is place, where you can spend nice day picnicking with friends. This park is well know right because of Hippie era, since it became the epicenter of hippie. Hippie people from all around the US literally moved to Golden Gate park to celebrate Hippie and to prove their stand against the war in Vietnam. More about Hippie era in my article If You Are Going To San Francisco…Bring Some Weed And Love.

San Francisco is an amazing place, probably one of my most favorite place in United States. San Francisco is not an American city. You can not feel here the impact of western culture as much, as in Los Angeles, for example. San Francisco is love its own life and more than America, you will smell here the weed :) really. You will definitely see many homeless people on streets (yes, unfortunately, this is the post era of Hippie). These people are those, who came in 60’s to San Francisco to celebrate freedom. Many of them has stayed here and live on streets. San Francisco is worth to visit, with no doubt and did you know, that you don’t have to spend hundred of dollars to enjoy this city and feel its spirit? :)