Visiting Alcatraz – world’s most famous and guarded prison is another must-to-see attraction in San Francisco. During your visit you will see horrifying morgue, Indian’s vegetable gardens or holes in walls, through prisoners have escaped. Let’s have a look. 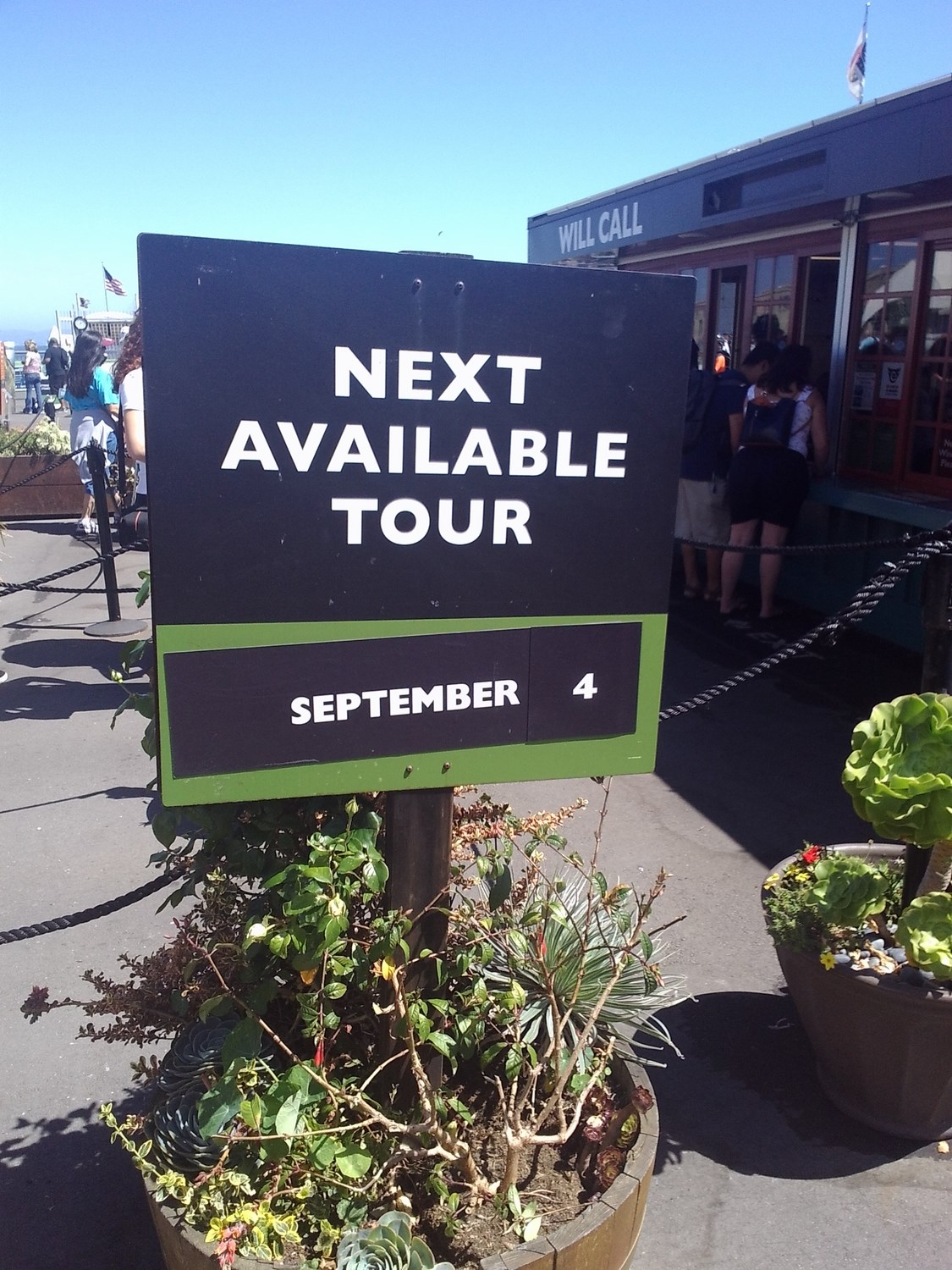 First thing you have to know, when you plan your trip to Alcatraz island is, that you have to book your tickets in long advance, as on most of all top attractions around the world. Don’t expect you will get your tickets 30 minutes prior to departure of ferry, tickets  are despairing sold out week before. Another thing is, that you ought be at the place of departure before the scheduled time, at least 30 minutes, to catch your place in long queue. The queue is forming before the ferry, in which you will stand around for 20 minutes. The queue is under the  roof so you won’t get wet or sunburned and I managed to catch some WiFi, so don’t worry. These 20 minutes will flow pretty quickly and for those, who don’t have mobile phones, there are pictures and quotes of famous people related with Alcatraz, so you will read a lot of interesting stories and see many pics before you even enter the island. 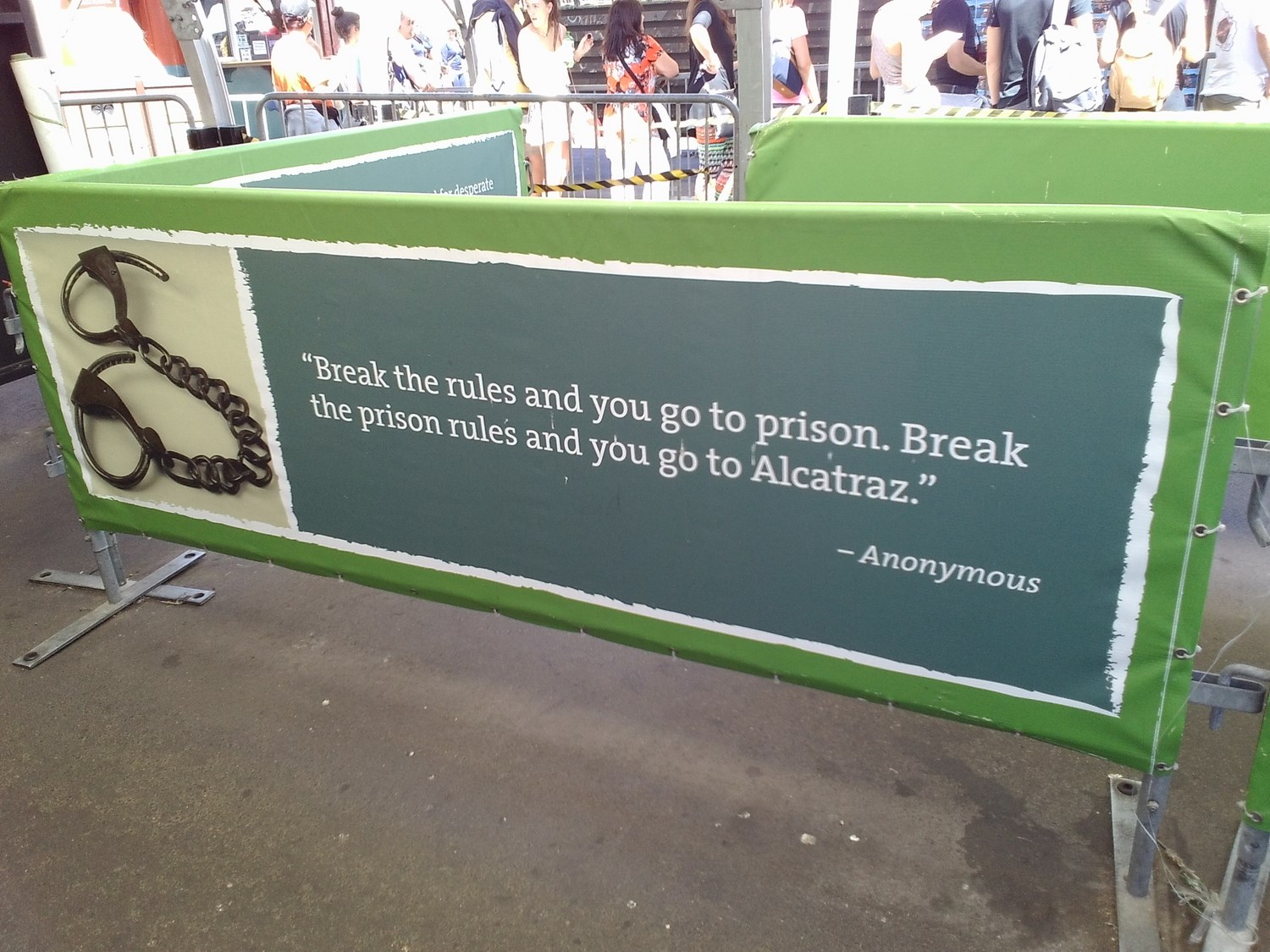 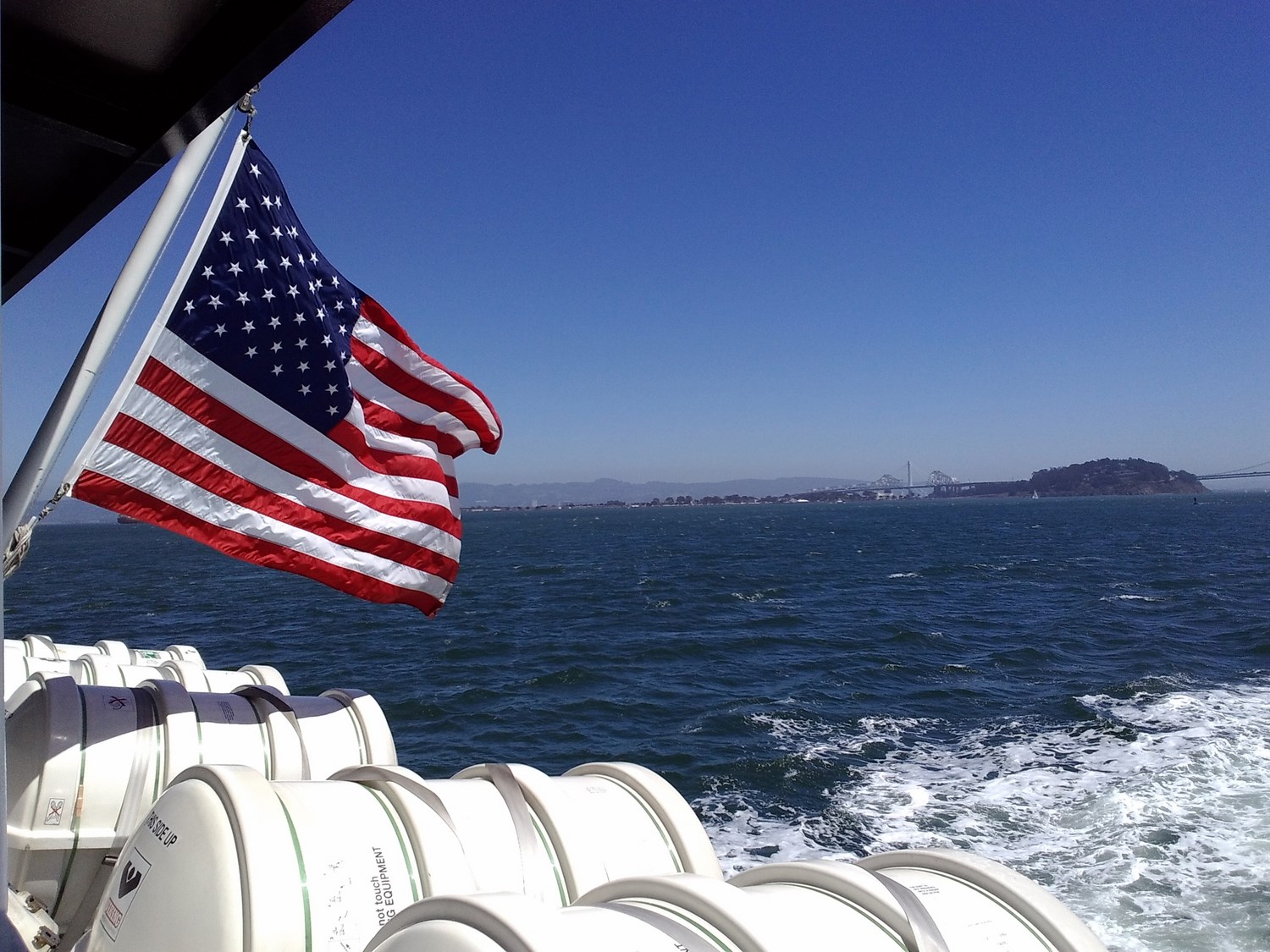 Tickets can be purchased from official page  and the price depends on if you are interested in day or night tour. Day tour costs 38 USD for adults, 36 for seniors and 26 USD for children. The ferry departs from pier 33 and the ride takes around 15 minutes to the island. You can stay there as long as you like, but you have to catch the last ferry from island, that departs ať 21:25. Who would want to stay in Alcatraz overnight? As I think about that, why not? haha. Even though, there are night tours, but I preferred day tour, since I wanted to enjoy the views from island and prison’s windows. Being busted in Alcatraz wasn’t only about being in the cell. Prisoners could see San Francisco’s skyline every day through their windows and that was to torturing for them – the freedom was so close, but too far at the same time. All of them have wished to be in San Francisco instead of this island, but all they had was just this beautiful view.

WHAT TO SEE ON ALCATRAZ ISLAND?

Except the prison itself and the building, there’s so much to see here. The island has been through more periods, during which it was used in many ways. 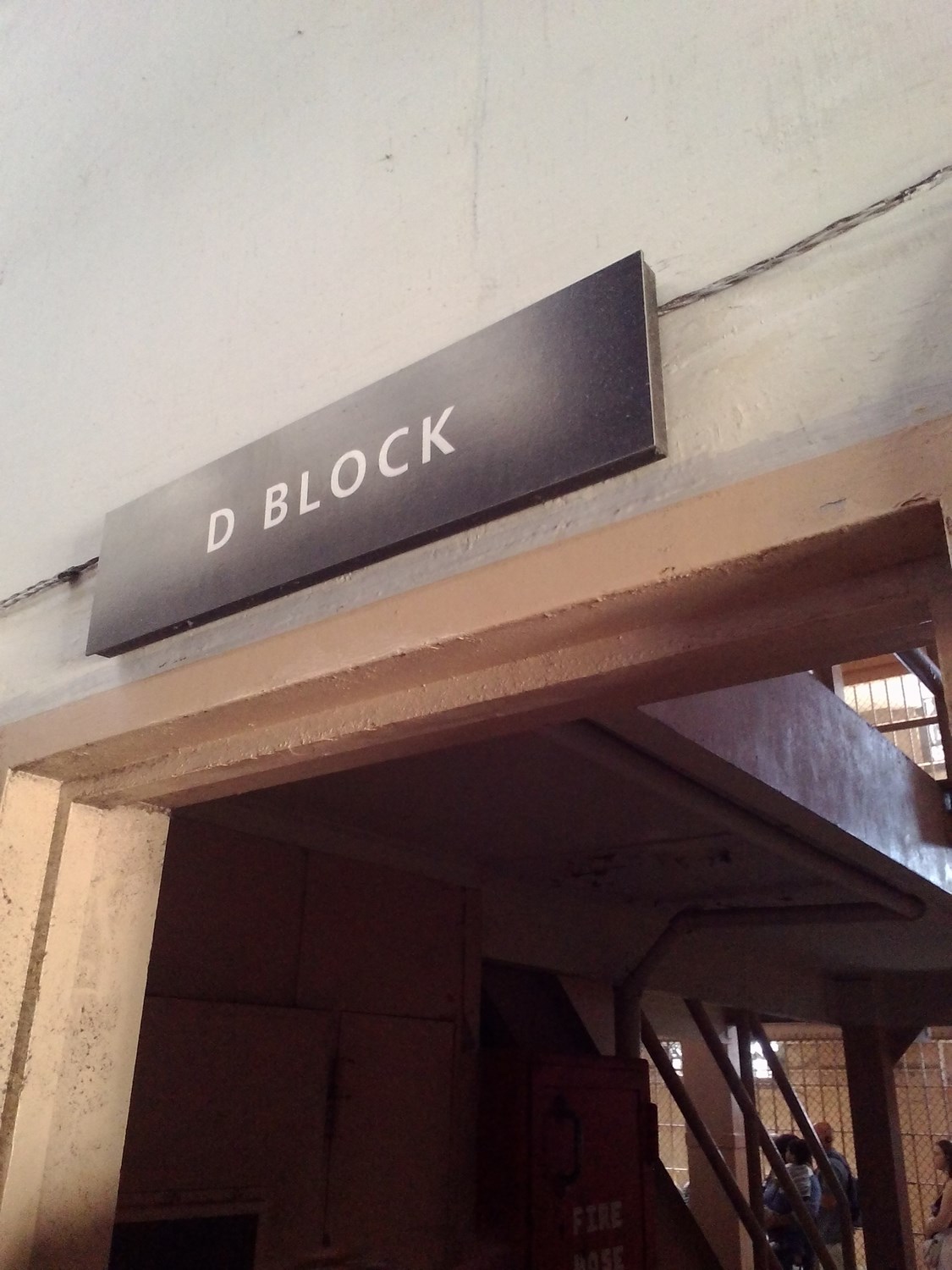 It is the darkest part of the prison, by prisoners called „the Hole“. If you were sent to D-block, you were the most dangerous person on island. D-block was the part of prison with highest guardiance and you were under the control non stop, all day and night long. Mostly, the D-block was a way, how to punish undisciplined prisoners, as well. If you have refused to obey officers or have behaved inappropriately, you were sent to D-block for few days, but never more than 19. These few days were worse than hell for those, who had to stay there, since often they haven’t got any food for three days. The cells in D-block were different. Prisoners had to sleep on cold, concrete floor, cells were very small and they didn’t have windows or lights. These fellas were literally like trapped in cold, dark cave with no food for three days. D-block was the place, against even people who killed hundreds people, felt respect. 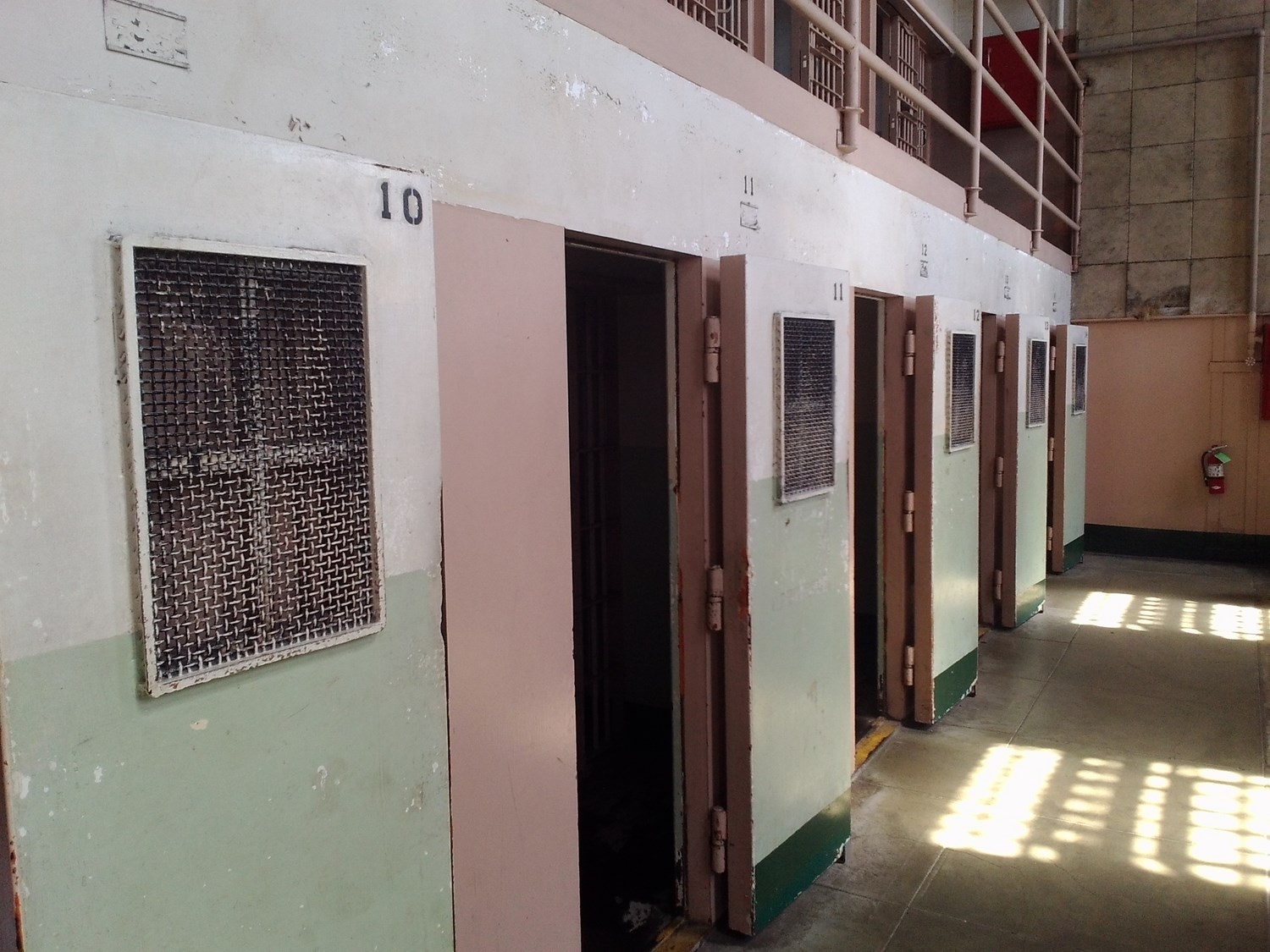 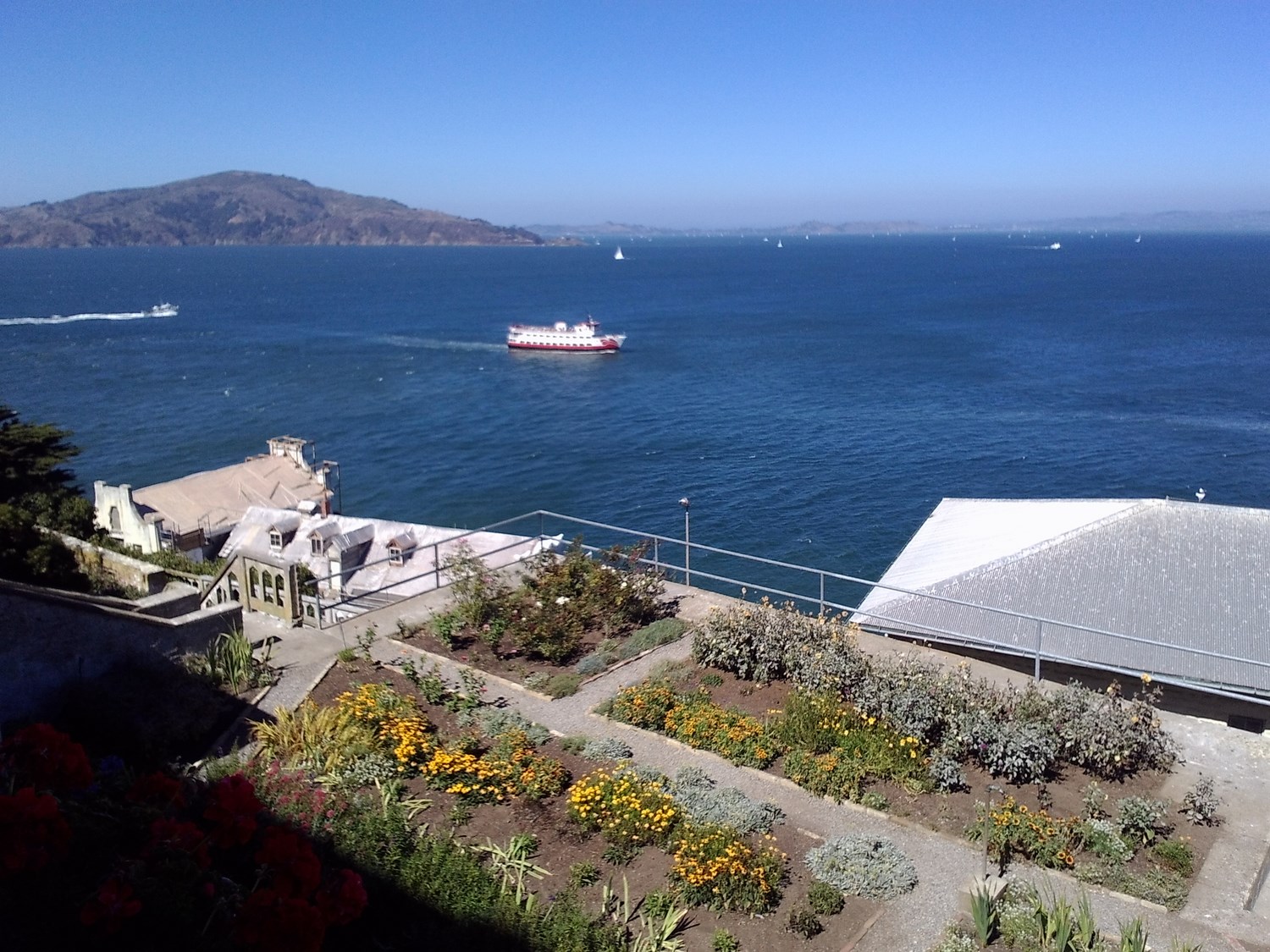 The Alcatraz island weren’t the prison island all the time. After the prison was closed due to high maintenance costs, the island was dominated by Indians, who lived there own, self sufficient life. They grew their now vegetables, therefore there are many gardens all around the island. Thanks to these little fields, we can read how Indians lived, what they ate and how they have approached to maintain self sufficient way of life. Few of these fields were dedicated to decorative purposes and those plants still grow there, even it’s more than 20 years since Indians left.

THE CELLS OF REFUGEES 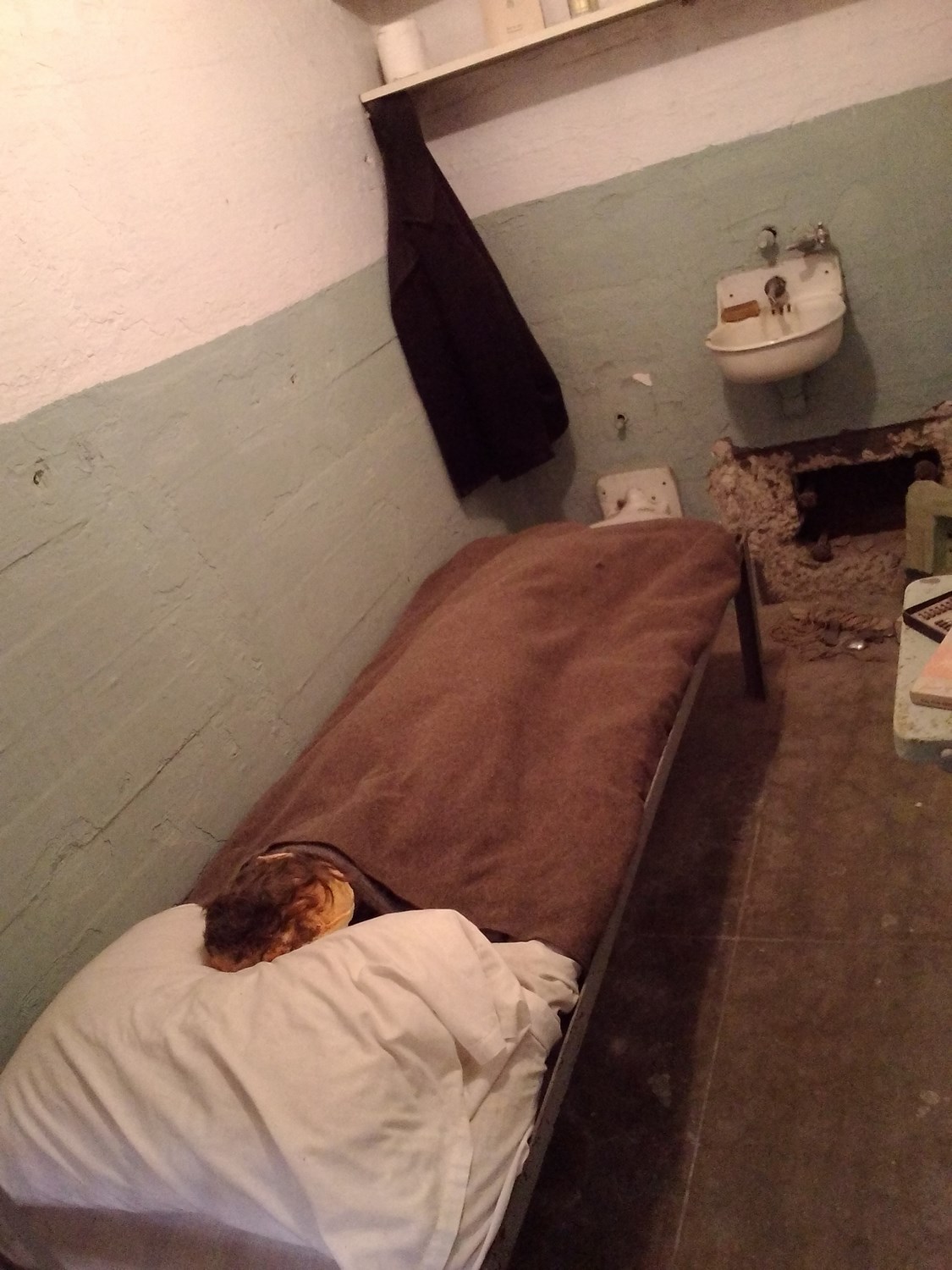 The escape from Alcatraz became legendary. Three prisoners have escaped through ventilation and have never been seen again. All what they used were spoons and they literally dig out of the cell. To get more time, they made replicas of their heads from soap and hair to confuse officers, so they thought, prisoners are still in their cells, sleeping under blankets. You can visit these famous cells and read more about this legendary escape. Cells are furnished, holes they escaped through are opened and heads still lying on bed. For me, this was probably the most touching moment of my visit. To see those cells I red about hundred times on news and holes in walls made only by using spoons, I felt respect for those three bank robbers, who found courage and escaped Alcatraz and probably, still live somewhere in this world. If they were caught, they would be murdered. 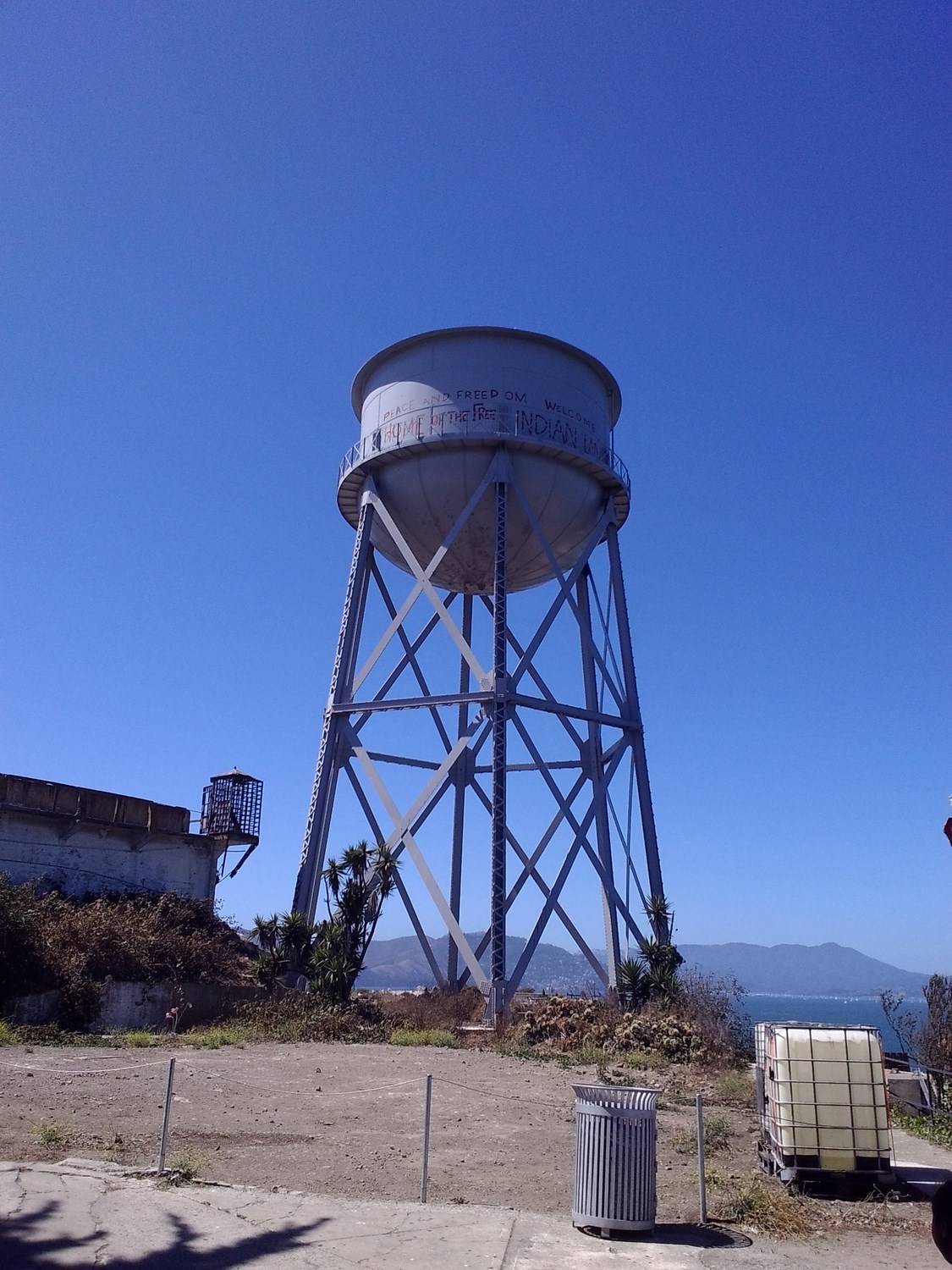 Except the vegetable gardens, which are all around the island, there is old morgue, built in 1910. Officially, it was used just once, when dead body of one of prisoners was laid here for night. Autopsy table has never been used, today is just covered with moss. There are many elements on the island referring about Indian’s occupation after the prison was closed. The sign „Indians welcome“ belongs among them, but there is water tower, as well which is empty since 1963. The island does not have its own watter supply, the fresh water had to be stored in water tower in northwest part of the island. There is sign as well painted on this tower saying „home of the free Indian land“.

The view I was talking about is really spectacular. And instead of prisoners who were tortured by this view, you can enjoy it as much as you like. Plan your trip to Alcatraz more around noon, not in the morning, so you avoid morning fog. If you’re lucky, the sun will shine and you can enjoy this awesome views of San Francisco, but don’t forget to bring warm jacket, the winds goes nuts and I almost froze there, in the middle of August. It’s easy to spot Golden Gate Bridge or famous Transamerica tower and right from the island, you will realise, how hilly and compact San Francisco is. 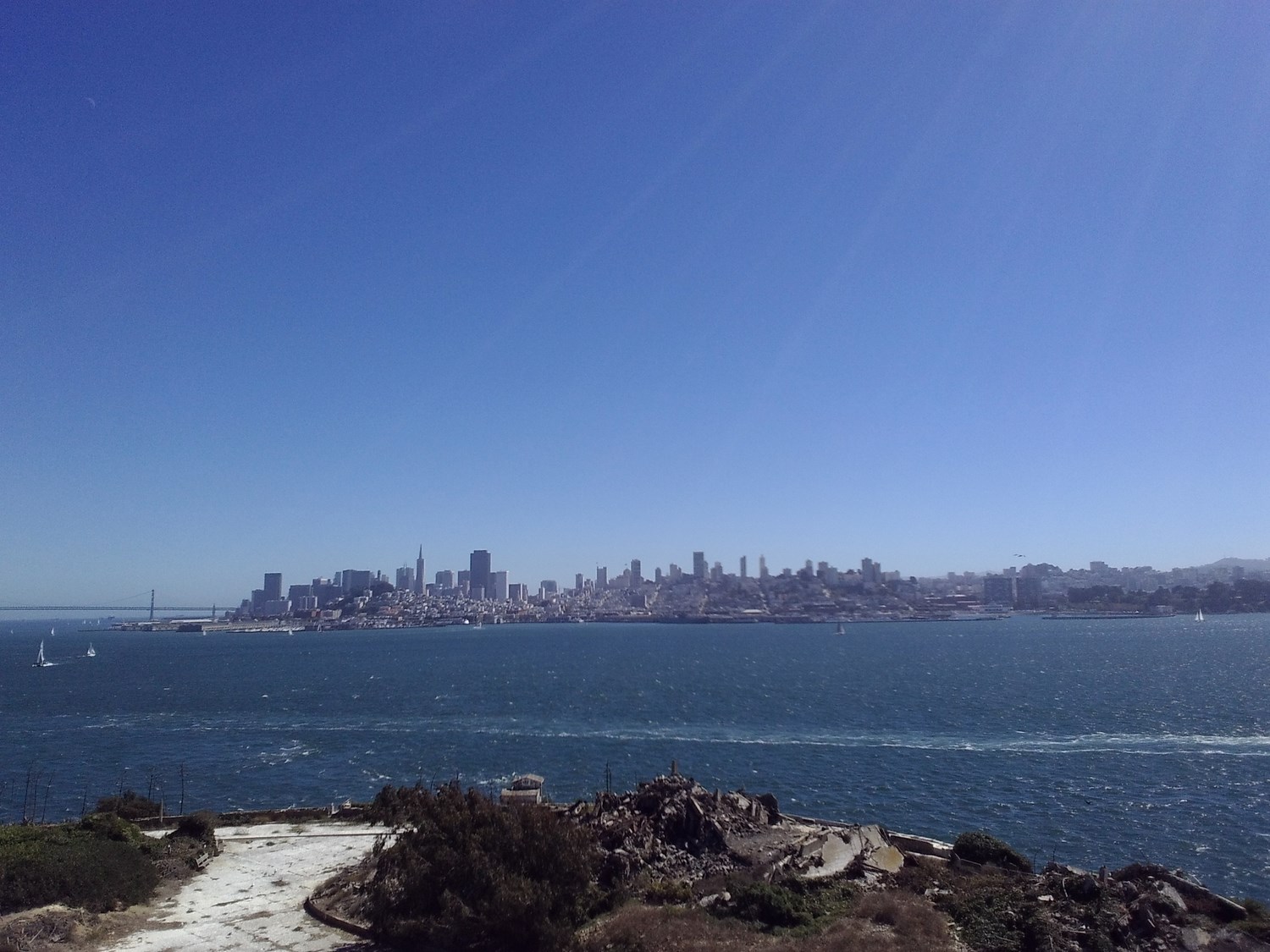 The visit of Alcatraz island was one of the things, I was looking forward to the most, in this city. Alcatraz is another top turist attraction in San Francisco, so be sure to plan your trip enough in advance. Annually, there are more than 1,4 million visitors. Alcatraz island is interesting place to see not only because of the prison building that remained till now, there’s so much to see. Things that refer, that this small piece of land in the middle of San Francisco Bay has rich history formed by American government and Indians. Island is wheelchair accessible and if you need any special assistance, please contact staff.

Milan Bardun, because it’s better to travel, than to arrive. 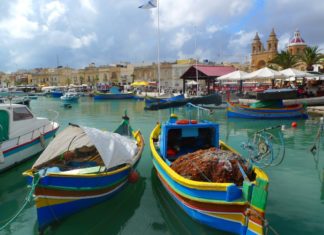 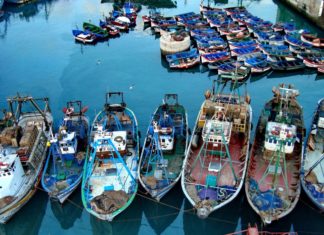 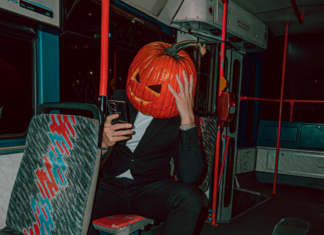